Mona Lisa is the famous oil on wood painting; portraying a woman sitting amidst the picturesque landscape. It is indefinitely the most celebrated work of the Italian artist of the Renaissance period, Leonardo Da Vinci. This portrait of La Gioconda is one of the most valuable paintings in the world and is kept in the Louvre Museum in Paris. The art can neither be bought nor sold. The article revolves around the mysteries and interesting facts concerning the masterpiece of Leonardo Da Vinci.

“MONA LISA” IS NOT HER NAME

“Mona Lisa” roughly translates to My Lady Lisa, but this is not the original name of the woman portrayed in the painting. The subject of the picture is presumed to be Lisa Gherardini who is the wife of Francesco Del Gioconda hence the underrated alternate titles; La Gioconda or La Jaconda. She was 24 years old and a mother of two.

THERE IS A DEBATE CENTERING HER EYEBROWS

La Gioconda lacks eyebrows and eyelashes in the portrait, and the reason for the same has been debated for the longest time. Some viewers opinionated that it might represent the high-class fashion of the time. Others were of the view that Da Vinci left the painting incomplete, making it an unfinished work which he left for his assistants.  Another popular belief is that the great artist did not leave his artwork incomplete, but the lack of eyebrows is the direct result of the restoration work done to the painting along the many years since its creation.

SHE IS A CAPTURER OF HEARTS

Since the first day of display, many romantics across the world had come to her bearing flowers, poems and heartfelt notes just to get lost in the intimidating and enchanting eyes of Mona Lisa. She receives a lot of handwritten love letters along with fan mails on a massive scale that she was under the protection for a long time. In the year 1852, an artist named Luc Maspero committed suicide by jumping from the fourth floor after writing a note confessing his love for La Gioconda and her breathtaking smile. He is not the only one to take his life for her as another fan has come to see her solely to shoot himself to death. 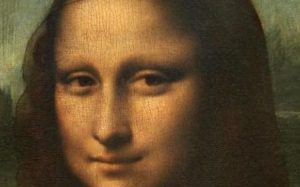 THE MISSING CASE OF MONA LISA

The painting of La Gioconda went missing from the Paris museum in the year 1911. Many had suspected Pablo Picasso to be the one who could have stolen the art. He was taken to custody soon after only to be released as he was proven innocent. The grief of the people of Paris after August 21, 1911, as compared to the pain experienced after the death of Princess Diana. Later on, the actual thief was found; Vinceco Perugia. He used to work in the Paris Museum, which holds the painting.  He firmly believed that the picture belongs to Italy, giving him the motive to steal the masterpiece and hiding it in his apartment.